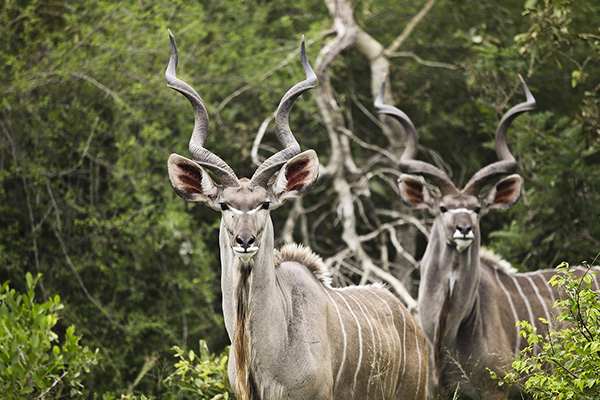 There are currently in the region of 5000 game ranches of different sizes in South Africa totalling a little more than 25 per cent of the country’s total land area. This is compared to just six per cent of the declared conservation areas and the three per cent which are covered by national parks.

There are a number of factors which account for this higher percentage of game ranches. Included among them are the problems associated with livestock farming and the increasing importance of eco-tourism. Both of these factors are linked to the economic viability of farming in South Africa.

Traditional farming has seen a significant decline in recent years. The number of commercial farmers has dropped to its lowest level in more than a century while the age of the farmers has resulted in a lack of experienced management in the sector. At the same time net earnings in the sector have dropped at more than five per cent per annum for the past ten years. Add to these factors the increasing encroachment of bushveld into traditional farming areas and the influence of ever-lower rainfall levels in these areas.

Game ranches on the other hand have experienced a significant increase. There is the obvious eco-tourism which results in foreign income being brought into the country. In addition to this, there is a vibrant hunting industry which brings in upwards of R3 billion annually to the South African economy. Hunting also aids in conservation activities by controlling wildlife population levels. More than 200 000 hunters harvest up to 1 million head of game each year. The cost of the hunts along with the purchasing of licences contributes significantly to the economy and more specifically to conservation efforts.

Add to this the peripheral earnings generated through taxidermy, freighting and forwarding services, as well as the benefits to local populations through the provision of the meat and consequential earnings.

All of these factors are resulting in Game Ranching becoming increasingly important. The vast majority of the game ranches given over to wildlife destined for hunting fall on land which is not, or is no longer, suitable for traditional farming practises or for eco-tourism.

Game ranches work on four main levels. The first is the sale of hunting trips and venison both in local and international markets. The second is the sale of live game at auctions and the translocation of the animals. The third is processing of animal products. The fourth is peripheral services such as the provision of game lodges, conference facilities and related services. All four generate significant job opportunities with resultant income generation for the industry and the country as a whole.

The end result is that game ranches will continue to make a significant impact on the local economy and its conservation efforts.

This article is based on the findings of a research document entitled: The Trend Towards Game Ranching in Southern Africa published by WildlifeCampus in association with ABSA.

Previous Post
Game Hunting – Right or Wrong?
Next Post
Some valid criticisms of hunting
Menu
This website uses cookies to improve your experience. If you continue to use this site, you agree with it.
Ok